bottomless baker | because baking in just an apron is more fun 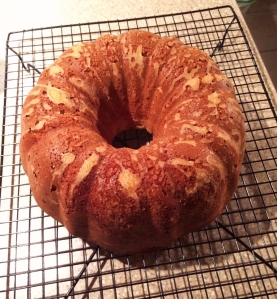 As much as I love strong, intense flavours, I’m also a fan of the more subtle. I recently returned from a trip to Iceland and really enjoyed the delicate flavours I experienced. Nothing was overbearing or intense. I should note that I didn’t eat any of the traditional dishes, like Hákarl or Svið. I did try a lot of baking, soups, sandwiches, and other dishes (like lamb loin) which were fantastic. I discovered a new favourite bakery you need to try if you ever make it to Iceland: Brauð & Co, known for their varieties of cinnamon buns (did you say vanilla cinnamon bun? Because this is my new favourite thing).

Anyway, what’s my point? Well, before I left I celebrated my friend’s 30th and baked her a lemon bundt cake with lavender icing. Despite lemon being a fairly strong flavour, I found this cake delicately balanced and subtle. It’s not difficult to make and easy to have fun with decorating. The icing is also so versatile, that you can get creative: want to try basil icing instead of lavender? Or maybe rosemary? Just sub out lavender for a similar amount of whatever you’re subbing. Or just leave it plain and call it a day!

Notes: Anytime I use food colouring (which is not very often), it’s never required. I find it helps elevate the look of desserts which also (in my opinion) makes them taste better! This recipe is a prime example of that: by adding a little food colouring to the icing, it makes it more apparently lavender, rather than a greyish white.